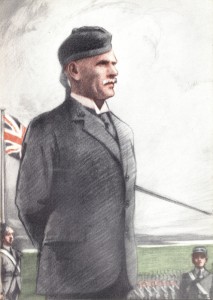 It was late on a Wednesday evening in July 1909 that William Smith quietly left The Boys’ Brigade camp at Tighnabruaich and departed for London. He was to return the following Friday morning to resounding cheers and applause from all the Boys at camp. He was now Sir William Smith, Knighted by King Edward VII for founding The Boys’ Brigade movement through the first Glasgow Company in 1883.

Since that first day of the beginning of the Brigade, Captain William Smith set about leading by example. He was an enthusiastic and tireless worker, a man of commonsense who came from a military background believing in discipline and organisation. He was also a religious man who grew up in a devout Scottish family and it was through these influences on his life that he founded The Boys’ Brigade movement, – following the principles of his own upbringing.

Smith was a true pioneer. What person could possibly think up the idea of putting young Boys in uniform, marching and using churches to meet together in groups? The suggestions, in a Victorian Britain, seemed absurd and there was much opposition to his early plans. Yet Captain Smith soldiered on. He worked hard travelling up and down the country ensuring that all Battalions were run to his exacting high standards and soon his infectious enthusiasm brought its reward. The movement grew and expanded overseas and from its pioneering spirit other youth organisations were formed.

William Smith was a Scot but not a Glaswegian as may be presumed. He was born at Pennyland House, half a mile from Thurso on the North Eastern coast of Scotland, son of a military father and into a strong Christian family. His early years were spent doing military drill and attending church meetings. When in 1909, just 5 years before his death, he received his Knighthood for services to Boys, a poem was written to mark the occasion by John W McLeod, which was printed on the menu at a dinner given in his honour, it read, –

“PENNYLAND”
Far on the shores of the surging Atlantic
Green between nurturing ocean and glen,
Among the wild machars of ages romantic
Born was the lad who had made us our Men.
Pennyland! Pennyland! Where is there any land
Strange to the Boys who were rallied before?
Marching Boys, valiant Boys, loyal and gallant Boys,
Guardians of honour the riven world o’er.
Back to our hearts comes the wash of the Pentlands,
Full of the tang from the days that are lost;
Sing him the songs of the salt, breeze and heathland,
Give him the strong hand and raise high the toast.
Lift now a cheer, like the voices of ocean,
Strong is his heart as the waves of the sea;
He who inspires all our Boys with devotion,
Hope of an almighty nation to be.
John W. McLeod

What would Sir William Smith have thought of The Boys’ Brigade of 1983? Certainly it has changed out of all recognition from those early pioneering days, yet as Baden Powell wrote, “William Smith was the first to recognise and seize the eager spirit of the Boy and to handle him in the right way for leading the lad through his own inclination to a sense of better things”. This must still remain the objective of the modern day leadership of The Boys’ Brigade.

This is an extract from the Glasgow Battalion Centenary Celebrations Book